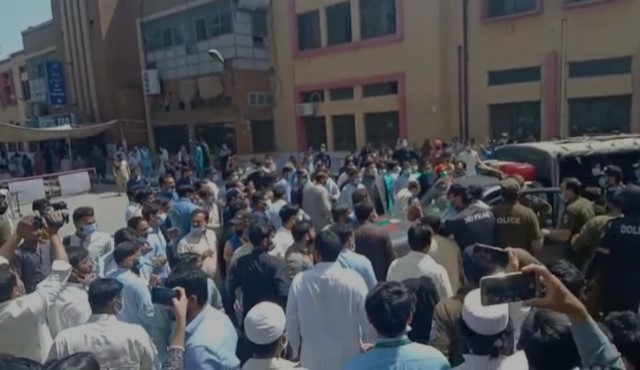 On 9 April, in-charge nurse, Maryam Lal and 3rd-year student nurse Navish Arooj working in Civil Hospital, Faisalabad, were charged with committing blasphemy.
A first information report (FIR) under blasphemy law section 295-B, has been registered against Maryam and Navish after a complaint from Dr Mirza Muhammad Ali.
In his written complaint he said while on his rounds of the Fatima ward with sanitary inspector Faisal Yaqoob, head Nurse Rukhsana told him that on April 8, Navish scribbled on a sticker inscribed with Durood Shareef (verses from the Holy Quran) that was displayed in the medical cabin. After stripping it from the wall, she allegedly handed it to Mariam.
According to the Muslim head nurse Rukhsana, she saw Maryam doing this and snatched the piece of paper inscribed with holy verses from her hands. She said she took pictures of that sticker to use as evidence. Rukhsana said that since it was the end of the day and most of the staff had left and there was no uproar, saving both nurses from the outrage.
She added that on that day nobody questioned Maryam and Navish but no Muslim can tolerate such contemptuous acts against their holy book and the Holy Prophet (PBUH)
To investigate the matter further, Dr Mirza and sanitary inspector Faisal formed an inquiry committee with the permission of Chaudhary Ghulam Sarwar, Master of Science (MS), Civil Hospital Faisalabad.
In a video we have seen, a Muslim ward boy Muhammad Waqas has also alleged that Navish removed a religious sticker from a wall and tore it up on her colleague Maryam’s call. He claims Maryam committed a blasphemous act that cannot be tolerated by any true Muslim and used abusive language against both Christian nurses.

In the video, he asks the audience: “Would you or anyone remain silent in the face of a blasphemy against our holy prophet Muhammad”?

His audience in response raised slogans hailing the Prophet Muhammad and chanting against Maryam and Navish.

According to Waqas when he asked Maryam, why she did this, “she told me rudely who are you to ask me?” then “I attacked her with a knife, but she was lucky, and was only injured”.

He went on to say that he wanted to kill Maryam on the spot because he loves his Holy Prophet (PBUH) and can sacrifice his life for his Prophet (PBUH).
In the video, Waqas can be seen provoking other Muslim staff members, who were supporting him. They were shouting and chanting words like Mashallah, Subhan Allah, Tehreek-i-Labbaik etc, so the situation in the hospital premises escalated.
In a video, one person is blaming the government of Pakistan saying the country is promoting blasphemers like Asia Bibi, who was acquitted by the Pakistan Supreme Court on 29 January 2019, and Tabeeta Gill, another Christian staff nurse working at Sobhraj Maternity Hospital, Karachi, who was accused of committing blasphemy on January 28, by her colleagues and has been relocated safely to European countries.
A huge mob was gathered outside the Civil hospital with people shouting for Maryam and Navish to be killed. But the police intervened in a timely manner and handled the situation wisely.
The case First Information Report (FIR) no. 347/21 under offence 295-B Pakistan Penal Code (PPC) has been registered in Civil Line police station against Maryam and Navish. Both nurses are in police custody and police investigations are ongoing.
Nasir Saeed, Director of CLAAS-UK, has expressed his grave concern over the blasphemy law’s continuous misuse.
“He said: “This is not the first incident of this kind, but in the past, we have seen how people use this law to settle their personal grudges or punish their rivals.
“I still remember 2009 when a Lahore Muslim factory owner was accused of committing blasphemy for removing an old calendar inscribed with holy Quranic verses from a wall. A factory worker killed him and two other men, and the enraged mob also assaulted management employees and set the factory on fire.
“According to some reports, last year 200 people were charged with blasphemy, while two people were killed.”
Mr Saeed further said this law continues to imprison and claim the lives of innocent people, but the Pakistani government has failed to make any changes or bring new legislation at least to stop the ongoing misuse of this law.
He said that because of the inaction of the government, people like Waqas are encouraged and take the law into their own hands.
Mr Saeed concluded: “Not everyone is as lucky as Maryam. We have seen many innocent people lose their lives, including the Governor of Punjab, Salman Taseer, and Shahbaz Bhatti.
“Pakistani politicians and Islamic Scholars must sit together and make changes or bring the new legislation to stop the ongoing misuse of the blasphemy law.”