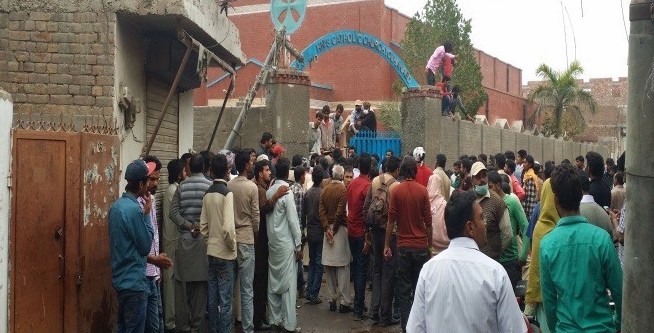 A prosecutor in the murder trial of two Muslim men was removed from the trial after he offered to acquit the defendants if they converted to Islam.

The offer had been put to 42 Christian defendants, by the Prosecutor in the case Syed Anees Shah. ‘He told them if they embraced Islam, he can guarantee their acquittal,’ says CLAAS’ Joseph Francis, who is leading the effort on behalf of the accused.

The accused were on trial for lynching two Muslim men in 2015. The men were killed in mass violence, after a suicide attack on two churches in Youhanabad, Lahore which left 14 dead.

Three years on, CLAAS has been heavily involved in this case – covered more fully in our February prayer update – and has been providing free legal aid to the defendants and their families.

It is believed that when the offer of guaranteed acquittal was made, all but one of the accused remained silent. One other man allegedly told the Prosecutor he would rather be hanged than convert to Islam.

At first Mr Shah denied the claims, but later admitted to making the offer of acquittal, when he was told that a recording of the incident existed. It is also claimed that he had already made a similar offer to the accused six months earlier.

Offering acquittal in exchange for conversion to Islam is commonplace practice in the Pakistani justice system. Rubina Bibi, who was charged and imprisoned under blasphemy charges in 2010 was made a similar offer – despite refusing to convert, she was later acquitted.

The incident was condemned from several quarters including Amnesty International. It follows only a few weeks after Pakistan’s PM Nawaz Sharif stated that Muslims were not allowed to force anyone to convert in Pakistan. However a bill banning forced conversions still hasn’t been passed in the country.

Please pray:
• Pray that the prosecutor will be swiftly replaced and a rapid conclusion brought to this trial.
• that CLAAS will continue to offer all the support the accused and their families need.
• that all of the innocent men and women will be released unconditionally.
• that the bill officially banning forced conversions to Islam will gain legal assent throughout Pakistan