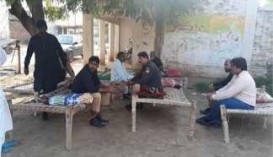 Christian farmer Manzoor Masih and his family were attacked by his business rival, and a case has been registered against the attackers.

According to Manzoor of Chunian, district Kasur, on the morning of 18th May while he was having breakfast with his family Muhammad Imran and several companions attacked his house.

They forcefully entered the house and shouted ‘we will not spare you today’. First Imran fired with his gun but luckily The bullet didn’t hit Manzoor and then another man hit him with a baton and his arm was broken.

Manzoor fell to the floor and they kept hitting him.

It was not that they were just hitting him, but they were continuously abusing him, calling him names and abusing his religion, Christianity.

Because of the interference from neighbours and several other people the men were forced to leave the house but threatened that they would kill Manzoor whenever they got a chance.

Manzoor said Imran is his business rival and wants him to leave the guava orchard he has had for the past 10 years. The orchard is my only living/income, and the owner of the Orchard has no problem with me while Imran wants to grab this orchard.

Manzoor was taken to the local hospital, where he was examined and treated.

Police have registered a case against Muhammad Imran and his companions, but so far they have failed to arrest them because they are so influential.