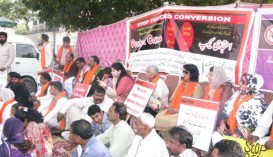 A Christian mother fears that if her kidnapped daughter is not recovered immediately, her abductor will sell her.

Hamida Bibi, 70, said it has been more than a month since they complained to the police about their daughter, Kiran’s, kidnapping, but there is no news about her.

The police arrested Kabir and his companions Bilal, Irshad and Ramzana Bibi, but the court has granted them bail, and they are roaming around freely because they are influential and have even been threatening the family.

Hamida said they do not know where Kiran is, and only God knows if she is alive or dead, if she has been sold to someone else or if she’s being held captive somewhere

The mother said the police are not helping the family, and they are poor and cannot approach the higher officials for help as they neither have enough money to bribe the police or know where to go for justice. The only thing they can do is pray to their Lord and hope the prayers will be answered soon, she said.

Hamida said they pray every day for Kirans’ safety and have hope in Jesus Christ that she will return home soon.

Kiran, 16, is Bashir and Hamida Bibi’s eighth child, she is the youngest and the favourite child of the family. Kiran was working with her mother as a domestic servant for the last year to support her family.

According to Bashir Masih, 75, on March 8 when Kiran and her mother were returning home from work a Muslim man, Kabir, and his companions stopped them near the Peer Pola graveyard and asked Kiran to go with them. When she refused, they assaulted her and her mother and forced her into their car and drove away.

Kiran’s brother Amir said when their mother arrived home, she was in a bad condition, crying and when they asked where Kiran was, she told them the girl had been kidnapped.

The family rushed to the local police station for their help but instead of taking any action against the kidnappers, the police told them to call the police emergency number.

They called a number of times, but nobody answered their call.

Amir said the family felt very helpless and didn’t know what else could be done or where else they could go for help.

After endless requests, the following day the police registered a case against Kabir, Bilal, Irshad and Ramzana under section 365b for kidnapping Kiran.

After a few days, the police arrested Kabir and his companion, but to cover their crime they presented a marriage certificate to say Kiran had married Kabir of her own free will. Amir said there was another man called Gogi who came to their home several times in the recent days and threatened them with a gun and told the family to forget about Kiran as she had married Kabir and didn’t want to talk to them or see them.

But the family refused to believe this.

Amir further said that another man named Waheed from Mughal Colony has also threatened them to stop looking for Kiran and withdraw their case otherwise they will kidnap another member of the family.

Hamida Bibi also said that during the investigation Ramzana Bibi told the police that Kiran was not the first girl they have kidnapped, but they had previously abducted two other girls who were sold for good money, and Kiran would be sold sooner or later and they would never see her again. She also said the police had taken a bribe from Kabir which is why they were not making any efforts to find Kiran.