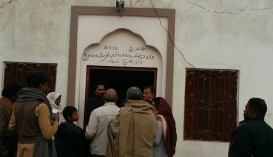 Pakistani police arrested the pastor and congregation of the New life Church in Mohallah Sialkoti, Lahore, during lent worship.

The arrest was made after a complaint to the local police by the Muslim residents of Mohallah Sialkoti.

According to Pastor Amjad and Elder Yousaf Lal, local Muslims in the neighbourhood have been regularly threatening them and forcing them to close the church permanently, claiming it is disturbing for them.

The pastor said that while they were worshiping in the church on February 25, some local Muslims complained against them and called the police to stop them from worshiping and to close the church permanently.

The police arrested Pastor Amjad and Elder Yousaf Lal without any investigation or arrest warrant but after intervention from their lawyer, they were released with a harsh warning and told not to open their church again.

They were told that if they opened the church again it wouldn’t be good for them.

Pastor Amjad said the church, ‘‘New life Church Pakistan’’, was started a few months ago because there was no church in the area and believers had to travel a long way to perform their religious duties. But since it’s opening they have been consistently threatened and abused for worshiping in the church.

On the day when police were called some local Muslim men and women interrupted the believers and told them to stop their worship. They even used insulting language against the Holy word ‘‘Halleluiah’, and forcefully tried to stop them from worshiping. The congregation was abused and pejoratively called ‘‘Chuhra” (sweeper) instead of being called by their names. They also disrespected the Christian way of worship.

Explaining the situation, Elder Lal burst into tears and said he had been serving in the area for the last 22 years, and it was his lifelong desire to open a church in this area so people wouldn’t have to travel a long way. He said there was no intention to upset anyone and they just wanted to continue the church in a peaceful way.

He also said that when they were in police custody, police Inspector Yousaf strictly told them not to open the church again, which was very unfair as if the Muslims are allowed to have their mosque in the area and use their loudspeaker five times a day, why not them.

He said if the police did not allow them to worship, he would commit suicide. He got emotional and after a deep breath said the church was his lifelong ambition and was established after lots of struggle and prayers. Elder Lal said it was very painful when the police forced him to give in writing that he would never worship in this church again.

He said that Pakistan is their country too and they are Pakistani citizens but are treated as aliens and slaves who have no rights in the country and branded the treatment of the police as disgraceful and horrendous.

Pastor Amjad said that this is a small church building which was built with the congregation’s own contribution. He added that it was not just a building but a house of God and cannot be desecrated. He said everyone should respect each other’s religion and beliefs. The premises are used every Sunday for worship from 10 am to 12 noon or only on other religious occasions like gatherings for the Holy Lent season in the evening. He said this was not acceptable to the Muslim community.

It is the second time that police have arrested church leaders during worship.

A female congregant said the Muslim community used insulting language against the Christian women. They abused them and called them names. When their children go outside to play with their friends, the Muslims beat them.