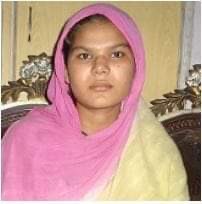 A Christian woman, Sonia, 24, from Rawalpindi was fatally shot in the head by a Muslim man called Muhammad Shahzad for refusing to marry him.

Sonia’s father Allah Rakha Masih, who works as a janitor, said that 13 years ago he moved to Rawalpindi with his two daughters, Sonia, and Nazish, 18, who worked as housekeepers and were a great financial help for the family.

Sonia and Nazish usually went to work together but on the morning of November 30, the day Sonia was killed, she left Nazish at the entrance of the Air Force Colony, where they lived in a rented house, and headed to Behria Town, where she was working.

As she was crossing the G.T. highway, Shahzad shot her in the head and killed her.

Masih said that Shahzad is Muslim and runs a photography studio in the town. For the last 4-5 months he was following and harassing Sonia. He had even proposed to Sonia, but even after her refusal he continued following her and insisting that she marry him.

Sonia kept telling Shahzad that it was not possible as she was Christian and he was Muslim. She told him they came from two different religions and it was not acceptable in society, but he didn’t agree and kept on threatening Sonia and eventually killed her on 30 November.

Masih said that Shahzad even sent his parents to their home to convince them to agree to the marriage.

“But I told them that it is not possible as we are Christian and you are Muslim,” Masih explained.

He added: “We are Christians from generations, and Sonia was a “true Christian and strong in her faith and she has been killed for following her Christian faith.”

The police have registered a case against Shahzad, but he is still at large.