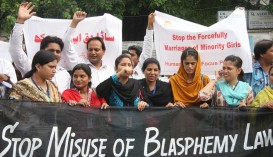 Zafar Bhatti, a Pakistani Christian who has been imprisoned since 2012 in Adiala Jail, Rawalpindi, charged with sending blasphemous text messages has said he is still strong in his Christian faith.

He told CLAAS’s team, who obtained special permission to meet him inside the jail, that because of his ill-health he is going through difficult times in prison but his Christian faith is still strong. He is spending more time in prayer and he is recovering from his ailments.

Zafar Bhatti said he suffered a paralysis attack due to high blood pressure last month. But he received timely medical treatment inside the jail and is now much better. He is suffering from multiple diseases including diabetes, heart problems and eyesight issues, but he is not getting proper medical treatment.

He complained that the jail authorities are not listening to him, and especially that they are not taking him to a private hospital outside the jail where he can get proper medical treatment for the conditions he is suffering from.

Bhatti was sentenced to life imprisonment on 3 May 2017, for sending blasphemous text messages, an offense which he denies. The mobile phone in question was not registered to his name. His appeal is pending, and hearings have been adjourned repeatedly over the last year.

Bhatti said that he has firm faith in Jesus; his Saviour will protect him and “soon I’ll be out of the jail”. He asked the CLAAS team to request Christian brothers and sisters throughout the world to pray for him. That they pray he is proven innocent and released from jail because he is being punished for a crime that he never committed.

CLAAS has filed his post-arrest bail on medical grounds so that he can get proper treatment from a private hospital. The judge has issued a notice and CLAAS is hoping the date for final arguments for bail will be fixed soon.

CLAAS also met his wife, Nawab Bibi, who said that she is visiting him every 2nd Thursday.

CLAAS has been supporting Zaffar Bhatti and his family and we are hopeful that this time his case will finally be heard.