HomeBlogLatest NewsBill for minority rights rejected by the Senate panel 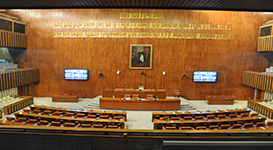 Bill for minority rights rejected by the Senate panel

A Senate panel in Pakistan has rejected two bills. One was seeking the protection of minorities, and the other sought amendments to the Muslim family laws.

The Standing Committee on Religious Affairs and Interfaith Harmony met under the chairmanship of Maulana Ghafoor Haideri. Last month the Protection of Rights of Minorities Bill, 2020 was introduced in Senate by Senator Javed Abbasi.

He added that a uniform curriculum was being introduced in the country.

But Senator Raja Zafarul Haq suggested there were very few instances of forced conversions in Pakistan in comparison with India where a war had been waged against minorities.

When they appeared before the court, they changed their statement under duress. The senator stressed the need for legislation to protect minorities.

But the bill was later rejected with a majority vote.

The religious affairs minister said the legislation for the amendments to the Muslim laws would create difficulties for the society.

He added that his ministry and human rights and law ministries had opposed the bill.

The bill was also later rejected.