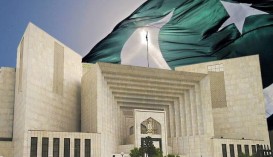 The Pakistan Supreme Court has ruled the “terrorism” as defined in the Anti-Terrorism Act 1997 is too wide.

It recommended that Parliament bring changes to narrow the meaning and scope of the term.

The court highlighted that the term has had been the subject of much controversy, and had been interpreted in many different ways by different benches.

The judgement sets out that the offence of terrorism is committed when under an organised plan, religious sectarianism is spread in society.

It can also be applied to the use of force, under an organised plan, for the realisation of religious, ideological or political goals.

It adds that “terrorism” can be applied when, under the plan, terror is struck in the hearts of people and damage dealt to lives and property.

Also falling under the definition are attacks on law enforcement agencies, security forces, journalists, the public, social sector and business community under an organised plan.

According to the Supreme Court an organised plan to damage government property and to commit theft and robbery under such a plan are also acts of terrorism.

Setting out what cannot be considered terrorism, the judgment highlighted setting things on fire and extortion committed as a result of a vendetta.

Personal enmity as a result of contempt for a person’s religion is not terrorism, the Supreme Court said.