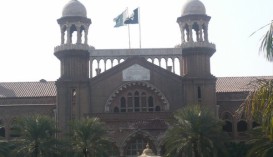 The trial of his case started in 2012 in the court of additional Sessions Judge Gojra in District Jail of Toba Tek singh.

On 13 July 2013, the court punished Sajjad Masih to life imprisonment and a 200,000 pak-rupees fine. In September his lawyer submitted an appeal at the Lahore high court.

In 2015 an application for suspension of sentence and bail was filed on behalf of Sajjad Masih which was sent to the bench of Justice Sardar Shamim khan in Lahore high court.

According to the lawyer Sajjad’s hearing was adjourned 8 times because justice Sardar Shamim did not want to hear this blasphemy case because of pressure from Muslim extremists and thus he kept on lingering in jail needlessly because the judges didn’t want to hear his case.

The attorney and family of Sajjad Masih were very happy that the day of his release had come.

Sajjad’s lawyer Javed Sahotra told the court that in section 426 CRPC two years have been given to hear the appeal of the convicted accused and if an appeal is not heard within two years after filing of appeal against conviction then the conviction is suspended and the accused released on bail.

The Judge heard two grounds of application and announced “I refuse to hear this blasphemy case because today this came to my knowledge that this is a blasphemy case and this will be heard by another bench”.

This came as a shock to Sajjad’s lawyer and his family.

Most of the judges avoid hearing blasphemy cases because of pressure from the Islamists and a lack of security from the government. It is a failure of government that even high court judges feel threatened and refuse to hear blasphemy cases.