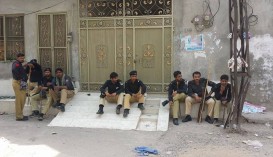 A Pakistani Christian man is fearing for his life after her fiancée was abducted, forcibly converted to Islam and forced to marry a Muslim man.

Sajid Maish from Changa Manga, Punjab, got engaged to Christian Nabila Bibi one year ago, and they were due to get married in November.

But Bibi was abducted by Muslim man Allah Rakha. Sajid and Bibi’s father, Bashir Masih, his cousins Antzar Masih and Qaisar Masih along with other family members searched for her for days, and when they could not find her, registered their complaint against unknown persons at Changa Manga Police Station. However, the police has not taken any steps to find either Bibi or her abductors.

On 16 October some men in plain clothes went to Bashir Masih’s home and warned him that his daughter had embraced Islam and married Allaha Rakha. They gave him some documents as proof of the conversion and marriage.

On October 22 Sajid Masih, along with his cousins Antzar Masih and Qaisar Masih, and his Bashir Masih went to Rakha’s home. When they met with Rakha and another fifteen to twenty men, they asked to meet with Nabila Bibi.

But they flatly refused and warned that she is now Muslim, threatening them with dire consequences if they did not leave or tried to return. The Muslim men then captured them hostage all night before being able to flee in the morning.

On October 27 some Muslim men came visited Bashir Masih and asked after Sajid Masih. They were told that he was living in the village of Kot Nanak Singh Wala, Changa Manga. Then the men went after him, forcing him to go into hiding.

Forcible conversion to Islam of Christian girls continues to rise. In such cases the police become biased and instead of taking action against the abductors, side with them, and even the court becomes biased. It is very difficult for Christian and Hindu girls and their families to get justice in such cases. The government is aware of this situation against religious minorities, but by ignoring it is almost approving of it.

It is very difficult for Nabila and her family, and it is not known whether they will ever be able to see each other again.