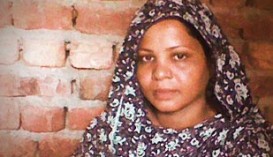 Religious groups of Sunni Tehrik have been demanding the execution of a Christian women charged under blasphemy law for some but after the execution of the Mumtaz Qadri demand has intensified.

In a recent sit-in by the religious groups in the D ground in Islamabad they demanded the government execute Aasia Bibi, but this was rejected.

But on Friday they demanded the immediate execution of Aasia Bibi who has been on death row since 2010, and all others convicted under the country’s harsh blasphemy law.

Her appeal was dismissed by the Lahore High Court in 2014, but the Supreme Court stayed her execution in 2015 and suspended the high court verdict. Now her case is due to be heard by the Supreme Court.

The Muslim leaders had also demanded the government not to make changes to the blasphemy law, something which it agreed to.

Bibi was arrested under the blasphemy law after she had a verbal altercation with a Muslim women working at a farm harvesting berries in eastern Punjab province. She was accused of insulting the prophet of Islam, a charge she has repeatedly denied.

Apart from the increasing international pressure there are several international campaigns and petitions ongoing to save Aasia Bibi. We are doing everything possible to publicise the case of Aasia Bibi, raising awareness about the continuous misuse of the blasphemy law and challenging the Government’s policies at an international level.