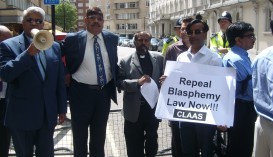 A Christian boy accused of blasphemy was rushed away from a court hearing in Pakistan after a Muslim mob threatened his family and demanded his death.

Nabeel Masih, 16, is facing the death penalty after being accused of posting on Facebook a photo of the Kaaba with a pig’s head on top.

When he appeared at court this week, around 80 Muslims confronted him and called for him to be hanged.

The teenager’s lawyers were also threatened by the mob.

Because of the commotion, the hearing said postponed to a later date. While Masih waits in jail, his family has been forced to flee their home because of the threats against them.