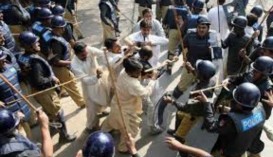 The hardliners’ protests following the supreme court’s verdict to acquit Asia Bibi continue.
Many roads of all major cities are closed and barricaded, and police and rangers are patrolling to monitor and control the situation.
According to reports all government schools and colleges, and even universities, will remain closed in Punjab and Sindh in view of the security situation.

Christians throughout Pakistan are on high alert as different reports from various sources suggest churches, Christian gatherings, Christian institutions and even Christian graveyards could be attacked.

Earlier in the week Imran Khan’s government issued a warning to protesters, but it does not appear to have had any impact, and according to news reports, on Thursday Prime Minister Imran Khan formed a committee to hold talks to end the ongoing protests being staged across the country.

Information Minister Fawad Chaudhry, Foreign Minister Shah Mehmood Qureshi and Minister of State for Interior Sheheryar Afridi we expected to be part of the committee which would hold talks with the protesters.

Religious Affairs and Interfaith Harmony Minister Noorul Qadri and Minister for National Food Security and Research Sahibzada Mohammad Mehboob Sultan will also be a part of the committee,

It is thought the minister for religious affairs will meet with the protesters while the premier will overlook the dialogue process himself.

On Wednesday Chairman of Pakistan Peoples Party (PPP), Bilawal Bhutto Zardari, urged all the political parties to demonstrate responsibility in the current situation as the country cannot afford any more tragedies.

Nasir Saeed, Director of CLAAS, said: “While we are rejoicing the acquittal of the Asia Bibi, at the same time we are very concerned about the ongoing security situation in Pakistan.

“Christians who are a beleaguered community and are living under constant fear for their lives are further threatened because of the present situation.”