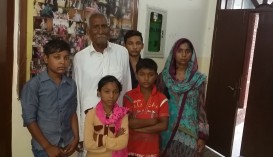 On August 7, CLAAS’s team, headed by Mr. Joseph Francis, National Director, along with Emmanuel Masih, father of Shafqat, and Shafqat and Shagufta’s son visited him in district jail Faisalabad.

This is a rare case where both husband and wife are charged with blasphemy and imprisoned in two different jails.

Shafqat Masih is at District Jail Faisalabad and has been sentenced to death on grounds of “blasphemy” under 295 C PPC, while Shagufta in Multan jail.

Shafqat, is presently receiving treatment for having bedsores on his body as he is disabled and needs a wheelchair, but he is recovering after being hospitalised for the past few months b

CLAAS also visited Shagufta, Shafqat’s wife on 13 August who is imprisoned in the same jail where another blasphemy victim, Aasia Bibi, is also incarcerated. Also present for the visit were Emmanuel, and the couple’s three children Zain, Joshua and Saira.

Shagufta is in good health, but sad and depressed as she is very concerned about her children as they are young who are being looked after by their grandfather.

She is also worried about her husband who is disabled. She asked CLAAS to help her to be transferred in District Jail Faisalabad with her husband, and Mr Francis promised to help her.

She shared about her strong faith in Christ and told CLAAS that He is our Saviour and since we haven’t committed any blasphemy, and though we are on death row at present, our God is very powerful, and he will get us released so that we will be able to join our children.

Shafqat and Shagfuta from Gojra have been on death row since last April. They were arrested on July 20, 2013, after registration of blasphemy case against them under section 295-C of Pakistan Penal Code, which has a mandatory death penalty.

CLAAS support the family and recently their children Zain, 14, student of 8th grade, Danish, 12, student of 6thgrade, Joshua, 10, student of 3rd grade and Saira, 9, student of 2nd grade, along with their grandfather Emmanuel Masih visited CLAAS’s office in Lahore, Pakistan.