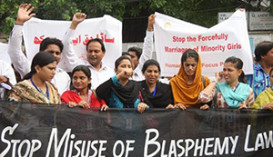 A Pakistani pastor who was accused of blasphemy has been freed by the court.

It is alleged that while in custody he was badly mistreated.

But Judge Zafar Iqbal cleared Masih of charges which alleged he had desecrated the holy Quran, and insulted the Prophet Muhammad.

Masih was arrested in February 2017, two months after local Muslims allegedly found 150 pages of the Quran lying on the ground.

The name of a Christian faith healer named Babu Shahbaz was said to have been inscribed on the pages.

After Lahore’s High Court released Masih on bail in 2017 he continued living in hiding while his case was under trial.