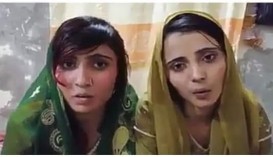 The Hindu community in Pakistan has protested against the kidnapping of two underage girls.

Hindus in Daharki taluka of Sindh’s Ghotki district staged a sit-in, after which a video claiming the two girls had converted to to Islam went viral on social media.

In it they claimed no one had forced them to convert, and that they had embraced Islam of their own free will.

But the Hindu community leaders alleged the underage sisters had been abducted by people from the Kohbar and Malik tribes on the eve of Holi.

An FIR was logged at Daharki Police Station on behalf of the victims’ brother, Shaman Das, son of Hari Das Meghwar.

According to the complainant’s statement , some time ago, he had a brief altercation with Barkat Malik and Huzoor Ali Kobhar, who used to stand outside his home.

Das claimed he was at home when six armed people entered and took the family hostage at gunpoint.

At one point, Safdar Ali and Barkat Ali caught the sisters, aged 13 and 15, and dragged them outside the house.

Meanwhile, Ahmed Shah and his three unidentified accomplices rummaged through the cupboards to find valuables.

Das says Safdar Ali, Barkat Ali and Ahmed Shah drove away with his sisters in a white Toyota Corolla, while the three unidentified men took off on their motorcycles.