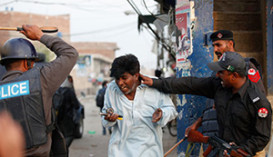 A Pakistani Christian was beaten to  death by police after his uncle refused to pay the extortion money.

Waqas Masih, 24, died after being brutally beaten on May 29 in Gujrat District.

His mother Khalida Bibi claims the police are now mounting pressure on them to reconcile with their accused colleagues, who they were initially reluctant to arrest.

But they were eventually taken into custody after protests were threatened.

Saleem Masih, Waqas Masih’s maternal uncle had asked Waqas and few other relatives to help him with his new construction project at his residence.

Saleem’s son Emmanuel Saleem was sitting in the courtyard of his house when three policemen stormed in and said they had information they were drug peddlers and were raiding the house to search for narcotics.

The three policemen had a reputation in the neighbourhood for blackmailing local poor people.

Since they had done nothing wrong, Waqas decided to confront the officers rather than give in to their blackmail.

As the situation deteriorated, Saleem Maish also started asking the policemen to leave his house and this resulted in a brawl.

The three policemen started threatening the Christians with filing false charges against them.

Waqas ran outside the house in an attempt to escape from the policemen, when they have chase as did the other cousins.

When the police got hold of Waqas they started hitting him mercilessly with punches, kicks and gun butts.

The cousins were also threatened when they tried to intervene.

After a while the three policemen arrived at Saleem’s house told him to check on Waqas saying he pretending to be hurt.

When Waqas rushed towards his nephew he saw him lying died on the street.