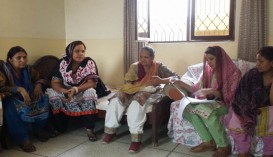 A teenage Pakistani Christian girl was kidnapped, forcibly converted to Islam and married to a disabled Muslim man.
According to Rasheed Masih, a Muslim family took his daughter Ribqa, who is still a minor according to Pakistani law, to another city Depalpur where they converted her to Islam and got her married to Waqas Muhammad 25, who is disabled.

Rasheed Masih, a married and father of 2 other daughters and one son, is poor and works as a labourer with a local landlord in his fields. He has lived in village 82/6r Sahiwal with his family since his forefathers.

According to him on 9 April 2018 when he was out of his house, Ms Kausar daughter of Ghulam Mustafa and Mariam, wife of Ghulam Mustafa, both Muslim residents of the same village, visited his house and requested to send Ribqa with them to Sahiwal, and they would return after two hours – Rasheed said his wife allowed Ribqa to accompany them.

He said that along with Yasir Masih son of Bakhshish Masih and Hameed Masih were on their way to work when they saw a car in which Waqas Mustafa and his mother Mariam, his sister Kausar, Sunny and Danish Haider were rushing to Sahiwal along with Ribqa. They chased the car but it stopped and Sunny and Danish came out threatening them with guns and threatening to murder them before making off in the car. Rasheed said they abducted his daughter only to rape her. He gave this statement to the police, and an FIR was registered.