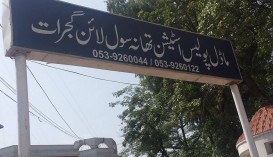 The case was registered on August 16 last year against sixteen people for displaying and publishing material which was considered threatening, abusive and insulting.

Later blasphemy law section 295-A and antiterrorism act 11-W was added for instigating sectarian hatred and hurting religious feelings and sentiments of the Muslims.

The charges were brought when Pastor Aftab Gill of the Biblical Church of God in Gujrat, published a post for the preparation of ordination ceremony and used the word “Rasool” for his late father Fazal Masih, who founded this church.

This offended local Muslims and a case was registered. The complainant was Mukhtar Ahmed, the Sub Inspector of Civil Lines Police station. .

Last year on 1st September 2015 CLAAS applied for bail in Gujranwala’s Anti-terrorist court but Judge Bushra Zaman only granted it to the Muslim, Zulfiqar – who had actually printed the poster – and all of the Christians were denied bail.

The misuse of the blasphemy law continues to rise against Christians in Pakistan. People use this law relentlessly to settle their personal scores and grudges over petty disputes. During the last month at least three Christians were accused of blasphemy – Imran Maish in Mandi Bahauddin for having an objectionable video on his phone; in Gujrat against a Christian seamstress, Sonia Gill, who was sitting on a banner bearing sacred Islamic names; and in Faisalabad against a Christian man, Usman Liaqat, for allegedly posting some comments on social media about eight months ago.

Christians are living under constant threat because of growing misuse of the blasphemy law and are continuously demanding changes or at least the introduction of safeguards to this law, to stop the misuse of this law. But it is all falling on the deaf ears of the Pakistani government despite calls from the international community.

CLAAS (centre for legal aid assistance and settlement) provides free legal aid and support to those who are charged under Pakistan’s blasphemy law, and also campaigns to end the misuse of the blasphemy law.