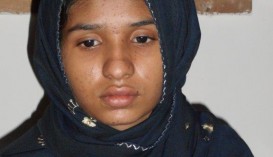 Pakistani schoolgirl Sara Bibi was beaten and locked in a bathroom for three hours after using a toilet designated for Muslims.

The primary school student in Samundari near Faisalabad, in Punjab, was punished after her classmates allegedly alerted their headmistress to her actions.

The designation of separate lavatories for minorities and Muslims in Pakistan is not unusual, as Christians are considered unclean, and by using the bathroom, it was considered that she had polluted it.

According to reports, after receiving the complaints, the headteacher Zahida Rana beat the youngster and locked her in the bathroom, allegedly telling her: “You are a Christian, an infidel. How dare you use the toilet for Muslim girls?”

Despite insisting she was innocent, the girl was punished and only released at the end of the school day.
Local Christians have strongly condemned Rana’s behaviour and have called on the Punjab government for a thorough investigation.