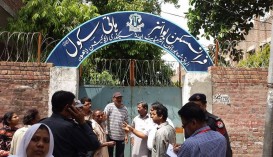 A 15-year-old student and security guard, Muhammad Amir, aged 40, were injured in the attack.

They were both were moved to Jinnah hospital for medical treatment. CLAAS’ team were told by some staff members that the school had been under threat from December 2014. Churches and Christian institutions have been targets for some time and last month St Peter’s church in the southern Pakistani city of Lahore was attacked.

St Franciscan School was established years ago to fulfil the needs of the local people, so children didn’t have to travel a long way to get education. It is considered a reputed institute in the area and according to reports there are 800 students enrolled and as well as other staff 30 teachers work there.

Sadly, as a community Christians’ churches, schools and towns are under attack by militants groups, but the government has failed to protect Christians and their properties despite the escalating situation.

We request you to pray for Christians in Pakistan that God protect them and they are able to face such challenges with bravery.