HomeBlogNewsPakistani teenager set on fire for being Christian dies in hospital 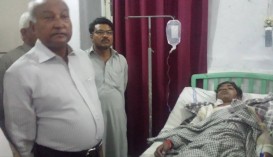 Pakistani teenager set on fire for being Christian dies in hospital

A Pakistani Christian boy who was set on fire after a mob of young Muslims discovered his religion has died of his injuries.

Nauman was brutally set upon by unknown Muslims who were going to the mosque to offer their Friday prayers. He was returning from the tailors when he was stopped and after identifying him as Christian, they threw kerosene on him and set him alight.
The youngster collapsed and fell to the ground before concerns onlookers called the emergency services and he was taken to hospital.

Before his tragic death Nauman told police what had happened and said that although the he didn’t know his attackers but could identify them by their faces.
However, they may now never be brought to justice.

The local police superintendent visited Nauman and recorded his statement. And the police have registered a case against the unknown attackers and started their investigation.
Joseph Francis, Director CLAAS PK and CLAAS’ team was present at the hospital while doctors conducted the post-mortem examination, his funeral was held in Lahore at 1.00PM.

Nauman’s father he died when he was just four and he had been living with his older sister at their paternal uncle’s home.

Nasir Saeed, Director CLAAS UK, condemned the attack, and demanded that the killers be brought to justice in an attempt to deter the killing of innocent Christians.

He said: “This latest tragic murder of an innocent teenager adds to the sense of fear that Christians feel in Pakistan, and comes soon after the community was shaken by two recent church bombings.

“The government must pay attention and do all that it can to ensure the safety of its minorities and to assure Christians of protection.”