HomeBlogNewsYoung boy set on fire after being identified as Christian 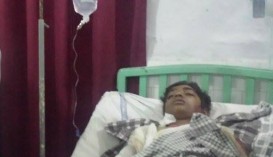 Young boy set on fire after being identified as Christian

Nauman Masih, 14, was set upon by unknown Muslims who were going to the mosque to offer their Friday prayers. He was returning from the tailors when he was stopped by young Muslims and after identifying him as Christian, they set him on fire.

Nauman gave a statement to the Superintendent of Police (SP) saying that two unknown Muslims came to him on a motorbike and asked him about his religion. He told them he is Christian and they started beating him. When Nauman tried to run away, both boys started following him through the street before throwing kerosene on him and then setting him alight.

Nauman was quoted as saying. “I was running when a heap of sand came my way, I lay down on the sand, and a few people from the community put out the fire by putting sand on me. I became unconscious, and they called the emergency medical helpline and called [for] an ambulance.”

Nauman said he didn’t know his attackers but could identify them by their faces.
The teenager’s father died when he was four and he and his older sister are living with his paternal uncle.
The local police superintendent visited Nauman and recorded his statement. And the police have registered a case against the unknown attackers and started their investigation.

Nasir Saeed, Director CLAAS-UK said it is a lamentable situation. Hatred against Christians has reached to such a dangerous level, and any innocent Christian can be killed by Muslim extremists without any reason. Living as a Christian is becoming increasingly dangerous.

Mr Saeed further said that for Christians who are already living under constant fear for their lives, this recent incident has increased their levels of insecurity. Although Prime Minister Nawaz Sharif has on several recent occasions in the past reiterated that minorities will be protected, unfortunately the lives and Christian places of worship are still not safe and protected.

Last November a Christian couple, Shama and Shahzad, were burnt alive in a brick kiln furnace, recently two churches were attacked, and now an innocent 14-year-old boy has suffered 55% burns just for being Christian.

Mr Saeed said that instead of empty promises, the government must come up with concrete plans to stop such incidents occurring. “The perpetrators must be brought to justice for lessons to be learned and to act as deterrents.

“Other people, and if necessary the government, must introduce some stringent punishment,” said Mr Saeed.

He added that Christians living across the world must raise their voices for their brothers and sisters being persecuted and killed in Muslim countries for nothing except their Christian faith. He further stated that it is the duty of the international community to take notice of the growing situation against Christians in Pakistan and other Muslim countries.