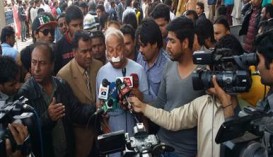 Two bomb blasts at churches in Pakistan have claimed the lives of more than a dozen Christians in what is the latest deadly attack on the country’s Christian minorities.

At least 78 people were reportedly injured and 14 killed in the explosions at a Catholic church and nearby Christ Church in Youhanabad, Lahore.

The area is the country’s most densely populated Christian colony, with about  40,000 of the minorities and fifty churches. Both churches that were attacked attract between 300 to 400
worshippers every Sunday, which is why they were targeted. The blasts occurred minutes apart.

Because of an increased threat against Christians, all churches have their own security and it is believed that one police guard prevented the situation from being much worse.

As he spotted a suicide bomber trying to enter the Catholic church, he stepped in to stop him, forcing the terrorist to detonate the bomb where he stood and preventing him from entering the church.

At Christ Church, another guard – Zahid Goga, confronted the second bomber but was shot in the head by his accomplice.

CLAAS’s office and shelter home are located on the other side of this colony, and when Joseph Francis, Director CLAAS-PK, heard the blast he ran to see what had happened.

He was injured too he needed four stitches to his face, but he is safe and feeling well.

Following the attacks Christians across the country took to the streets to protest, and some reports even suggest that they burnt alive those they believed to be involved in the attacks.

Nasir Saeed, Director CLAAS-UK said: “Although the incident has been condemned by Pakistan’s Prime Minister, President and the majority of politicians, and compensation has been announced for the dead and injured, this is not enough.

“Christians are constantly under attack, especially with their churches and colonies being attacked under the cover of blasphemy accusations, and sometimes by Taliban and extremists.

“Christians are living under constant fear for their lives and many have fled the country.

“I believe these attacks are sustained attempts to force Christians out of Pakistan.”

There is a constant demand to provide security to Christians and even the Supreme Court of Pakistan has ordered security to be provided to them, but the government has not done anything about it.

Mr Saeed continued: “I would like to salute to the bravery and sacrifice of Zahid Goga who martyred himself to save hundreds of faithful who were worshiping in church. I also salute the bravery of the policeman who was killed at Catholic church in his attempt to stop the attacker.”

He added that the government had failed to provide justice to Christians in light of previous attacks, as most the incidents had taken place in Punjab where unfortunately PML- N has close ties with extremist groups. And because no one has been ever brought to justice, extremist groups are encouraged as they know no action will be taken against them.

“This attack is a reflection of the government’s failure and unfortunately I fear this is not going to be last attack against Christians. The international community must pay attention to the ongoing persecution of Christians in Pakistan,” said Mr Saeed.

He welcomed those who had condemned this attack, particularly the Pope condemnation saying it gives the very important message to the world and particularly o the Pakistani government and leadership that Pakistani Christians are not left alone in such difficult times.

“Such statements from the international Christian leadership are highly appreciated and encourage the Pakistani Christian community and keep their morale high,” Mr Saeed concluded.