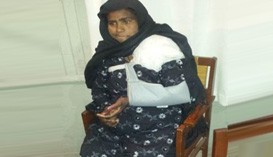 A young Christian man was tortured to death by Pakistani police after his mum was accused of stealing gold from her Muslim employer.

Zubair Masih, 20, was taken into police custody after allegations were made against his mother, Ayesha Bibi, but was not released with the rest of the family.

Instead his body was dumped outside the family home after he had been tortured at a police station throughout the night.

Ayesha was said to have stolen some gold and money from her employer, Abdul Jabar’s, house, where she had been working as a domestic servant for Rs 2000, around £14 per month, for the last two months.

According to the widow who lives in a rented house, she did not commit the crimes alleged

One evening Jabbar entered her house along with some police officials and accused her of stealing gold and Rs.36000 (almost £237) cash from his house.

She was told that an FIR (first information police report) had also been registered against her.

Ayesha Bibi was shocked and said that she did not know about any gold and money but Jabbar and the police started beating her and took her with them to her brother Arshad Masih’s house, where her two sons were also living.

Jabbar claimed that she had given the stolen gold to her sons, while Ayesha Bibi insisted she was innocent and did not know about it.

Jabbar started beating her again while the police watched on in silence and stood idly by as Jabbar took the law into his own hands.

The officers took the whole family to the police station where they were tortured and Ayesha Bibi’s arm was broken.

At the end of the day everyone, apart from Zubair, was released.

The family was worried about Zubair’s wellbeing as torture is very common, especially against Christians, and the following day, March 6, their fears became a reality when the police left his dead body in front of the house.

The family hastily took the body to the hospital but the doctor pronounced Zubair dead and confirmed the cause of death as torture, with him having suffered multiple injuries.

It was heartbreaking news for the family, especially for Ayesha Bibi whose young son was killed for being poor and Christian.

The next they started to protest with Zuabir’s dead body in front of the police station demanding for the killers to be brought to justice.

They protested for two days, and after the intervention of civil society and media, a case was finally registered on March 8 against ASI (assistant sub inspector police) SarajulHaque, three other unknown police officers, and Abdul Jabbar.

Although the police have ensured justice – which is very unlikely to materialise – the family may be offered compensation and forced to withdraw their case, as normally happens in such cases.

After collecting the facts CLAAS-PK’s Director Joseph Francis had a meeting with the family and offered them free legal aid and any other support they may need.

Christians are poor and illiterate and the majority of them are forced to take menial jobs.

Many Christian women and young girls work as domestic servants to earn a living and support their families.

Their Muslim employers treat them as salves, sexually harass and abuse them and very often fabricate criminal allegations against them.

Please pray for the family who are suffering and grieving, that Lord our God gives them strength to endure this agony, that they stay strong in their faith and justice is done.