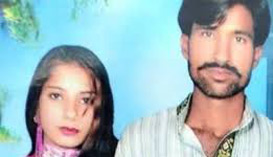 On 26 February, the Pakistan Supreme Court, hearing the suo motu case of Christian couple, Shama and Shahzad who were who were beaten by a Muslim mob and then burnt alive in a brick kiln furnace on blasphemy allegations, expressed its dissatisfaction over the report submitted by Punjab Police inspector general (IG).

It summoned the investigation officer and prosecutors, to court on March 9, along with a detailed report on March.

Heading a three-member SC bench comprising of Justice Azmat Saeed and Justice Mushir Alam l, Justice Jamali said the police had failed to arrest the culprits of the incident so far.

Justice Saeed said the State was the guardian of basic rights of masses and it represented the repressed segments of the society. He observed that the police did not reach the site on time after the couple were burnt alive, adding that only two police personnel were punished in this case.

The court also observed that police had failed to render its professional obligation at the time of the incident. It said that so many incidents of violence happened but the police had done nothing to protect lives.

Adjourning the case till March 9, the court directed the IG to submit a comprehensive report stating what action had been taken so far against the police officials who showed their negligence of duty at the time of tragic incident.

Shama and Shahzad were burnt alive on November 4, 2014, by a mob of more than 400 Muslims after being accused of desecrating the Holy Quran.