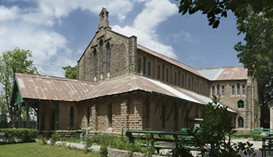 A Christian school in Pakistan was stormed by hundreds of armed Muslim students protesting against the publishing of controversial magazine Charlie Hebdo, demanding that it closed.

Four students were injured when the protesters stormed Panel High School for boys in the northwestern Bannu city in Khyber Pakhtunkhwa.

They school building was vandalised property and today the school remained closed on Thursday, the day after the attack.

A meeting of Christian leaders and the district administration has been called to discuss the issue, and additional security steps have been taken.

Nasir Saeed, Director CLAAS-UK said: “It is very sad because Pakistani Christians are equally angry about Charlie Hebdo, and many Christians have been participating in the protests against the magazine.

“It is very unfortunate that even after 67 years Christians are not considered Pakistani citizens but they are considered allies of the west and therefore whenever such incidents happen in western countries Christians come under attack.

“Their churches are attacked and their properties are set on fire, and such incidents make Christians, who are already living under constant fear for their lives, become more vulnerable.”

He concluded: “It is the responsibility of the politicians and the government to create such an environment where Christians and religious minorities feel safe and secure.”